"We were just discussing in the staff room, and we all feel inspired by you!" said the IIM-A professor in my one to one interaction with him at the end of the Management Development course I was attending.

I was flabbergasted. I was at the premier management institute in India and here to be inspired by the greats. Why were they saying they were inspired by me? As he went on to enunciate what he meant, I realized that all you have to do to inspire people around you is just be yourself.

One incident that stuck in his mind was how I returned to the hostel one day at 5.30 am and met him while he was on his morning walk. He was convinced I would not make it to the 8.30 am class that day, but did not say anything. Yet, there I was at 8.30, after a short power nap in my room, on the front bench, keeping my eyes open and participating in the class. For me, it was nothing out of the usual. It was the month of Ramadan and that was a night long prayer session that I had attended in the last week of the holy month. Something I had been doing all my life, ever since I can remember.

That made me realize that you do not have to do super human feats to inspire people. The only thing you need to do is just be yourself. Your daily routine, your work ethics, your philosophy of life, which you consider as an ordinary thing, may be something inspirational for someone else. Just be there for people. That is sometimes enough.

This is also a great step towards self acceptance. We all have some flaws, but it is important to focus on the positive things we do. That is most likely what we also project to people around us. You don't need to be perfect. Just being real is enough. If we are true to ourselves, that itself could be a shining light for someone.

When approached for advice, we may even feel internally - am I qualified to advise someone on this? What is important is maybe just to listen to people. It is possible that all they needed to come to a decision was to verbalize the problem and options.

You might be surprised at the difference you make doing regular things. Just showing up consistently to your various routines makes the world go around with better vibes than it would have without you.

The difference between 'Giving Up' and 'Letting Go'

The pursuit of goals often blinds us to all else happening around us. It is like driving down a highway at max speed where your line of vision is restricted to just the lane markers going by. Such unsustainable effort in one direction will only lead to a burn out or a crash.
How do you 'clean up' your old goals, desires, passions and what is the difference between 'Giving Up' and 'Letting Go'?
Read the complete blog on https://www.linkedin.com/pulse/difference-between-giving-up-letting-go-fakhruddin-bandukwala?trk=pulse_spock-articles

Learning Win-Win from a waiter in Thailand

I was in Bangkok for a business meeting with a European client on the sidelines of a conference. We met in the lobby of the five star hotel. This was more than a decade back and smoking bans in public places were not yet ubiquitous. The client fished out a cigarette and as the waiter was serving us coffee, he asked as a formality, "Can I smoke?".

Read what happens next on my linked in post - https://www.linkedin.com/pulse/learning-win-win-from-waiter-thailand-fakhruddin-bandukwala?trk=mp-author-card
Posted by FJB at 6:49 AM No comments:

Adopting agility and scrum in IT projects is more about changing mind-sets. The practices and processes will follow. If your organization is moving from waterfall to scrum you will mostly find the Project Managers are renamed to Scrum Masters and work carries on as usual. This renaming is not enough.

Read the complete blog on https://www.linkedin.com/pulse/changing-mind-set-agility-using-scrum-fakhruddin-bandukwala?trk=hp-feed-article-title-like
Posted by FJB at 9:51 PM No comments:

So, LCD is an acronym for Little Connected Data. I have been fascinated by the perception changes caused by connecting little bits of data. The uncovering of these new meanings in little data can lead to huge insights in customer behavior in a local, social, online or offline setting. Something which Big Data endeavors to reproduce by looking in a similar manner at huge amounts of data.
Read the complete blog on https://www.linkedin.com/pulse/move-over-big-data-lcd-here-fakhruddin-bandukwala?published=t
Posted by FJB at 1:48 AM No comments:

The utility of consensus

When teams choose to work together they need to commit to the betterment of the team leading in consequence to a betterment of their individual situations. This commitment towards the best interests of the team is what leads to teamwork and is a key element for achieving consensus. 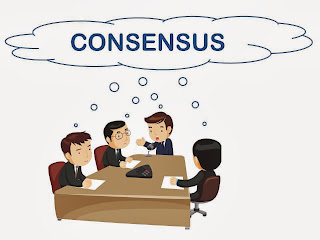 Earlier I had written about situations where it is futile to seek consensus. When it is necessary to take some quick, hard decisions, a tough leader (think Welch, Jobs etc.) has no business building consensus. But tough times don't last and crisis is not an everyday phenomenon. If it is, then it is better to take a hard close look at your business model and dynamics.


One of the pitfalls to avoid is faux-consensus. This is a false feeling of consensus based on team's sign offs on paper while in reality, doubts still linger. Often leaders will get teams into a room and lay out the 'what' they want to achieve and ask the team to come with 'how' they will achieve it. Larger teams often are broken into cross functional groups and asked to brainstorm on the 'how'. What emerges is a purely academic exercise with no clear ownership or buy in for the action items assigned to this team.

What is necessary is for the team to first deliberate on the 'what' agree on a common imperative they all feel is worth achieving. If this goal can be signed off by the team with commitments of timeline and individual ownership towards goal breakdown items, the 'how' can be left to the teams to work out over time as they proceed working on the goal.

It is to be noted that majority agreement is not consensus. Consensus is when everyone agrees to the common goal. This means arriving at a solution where diverse views and agendas have been addressed everyone feels there is something for him  in the end result. Such a result is indeed likely to be robust and may turn out to be far better than the original idea. 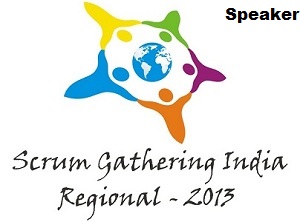 I will be speaking at the Scrum Gathering India in Pune this Friday - 26th June 2013, about the components of a successful agile journey based on my experiences in Agile and Scrum. It will be exciting to address this gathering after two years of conducting Agile and Scrum Fundamental classroom training and hope to bring forth a view from the accomplishments of scrum projects executed.

The discussion will cover Agile Maturity Models assessing readiness of organizations to be agile, the various metrics and more interestingly the non-metrics used to get a view of where we are and where we want to be on the agile journey.

How to select projects for scrum at various stages of the journey and finding the secret sauce for successful scrum forms part of the agenda. This is topped up with a discussion around the Scrum values and how we can relate to them in our quest.
Posted by FJB at 11:25 PM No comments:

Word Cloud for this blog